On the Journey to Breakdown Whiteness

I remember meeting with small groups across the congregation for meals in people’s homes (ah, pre-COVID nostalgia) and having raw, empathetic, and meaningful conversations about what it meant to be white and Christian in a world where racism persists. Those conversations were often about personal consciousness raising, awareness of one’s own racial identity, and the historical nature of racism. We never made it to asking how structural racism affects our community or our church.

On the Journey to Breakdown Whiteness
By Kate Ott

The summer of 2020 will be memorable for many reasons. My hope is that for those of us who are white Christians, we will remember this summer as the time we finally took to the streets joining our Black and brown siblings in protest, or spoke up when friends and family members dismissed police violence as an individual problem, or joined political movements to reshape our communities into what Martin Luther King Jr called the “beloved community.” Like you, I did many of these things. I also worked with a team to develop a website called Breakdown Whiteness as an on-going response to structural racism. Before we talk about this resource, some background will be helpful.

As members of First Church Guilford, you might remember that over a decade ago, we participated in some of the first UCC Sacred Conversations on Race now called Sacred Conversations to End Racism. I remember meeting with small groups across the congregation for meals in people’s homes (ah, pre-COVID nostalgia) and having raw, empathetic, and meaningful conversations about what it meant to be white and Christian in a world where racism persists. Those conversations were often about personal consciousness raising, awareness of one’s own racial identity, and the historical nature of racism. We never made it to asking how structural racism affects our community or our church.

Even a decade ago, we (meaning: predominantly white economically privileged Christians) were still focused on a “personal sin” approach to racism. That is to say, when I engage in conscious or unconscious forms of racism, I am sinning, I need to change my behavior, and I should uproot my unconscious bias in order to be a better Christian. To this, I say, “Yes!” AND racism is not only an individual problem. Racism is what theologians would call systemic or social sin.

In the early 1900’s, Protestant theologians across the United States began a movement called the Social Gospel. This movement and its academic sibling, social ethics, urged Christians to understand Jesus’ primary message as a call to change social structures in their everyday lives toward a more just social order like abolition, worker protections including child labor laws, government policy against monopolies, and sufferage. This is a message we at First Church recognize as the Christian theology we follow. At the time, the demand for Christian social action was counter to the dominant traditions that focused on personal piety and reward in the afterlife. Yet, for all the consciousness raising and social action that comes from the social gospel movement, its leaders were not immune to reinforcing sexism and racism within the movement. I suspect this is a perennial problem for the privileged who participate in justice movements.

I believe we can learn at least three things from these historical movements which seem very alive today.  First, social sin requires a broad collective approach while not abandoning accountability to personal change.  Second, we need to deepen the precision with which we understand how systemic oppression is created and held in place through laws, social policies, and everyday community practices. Third, Christianity and Christians in the United States play an integral role in either maintaining or changing social injustice.

What do these three things have to do with a website? 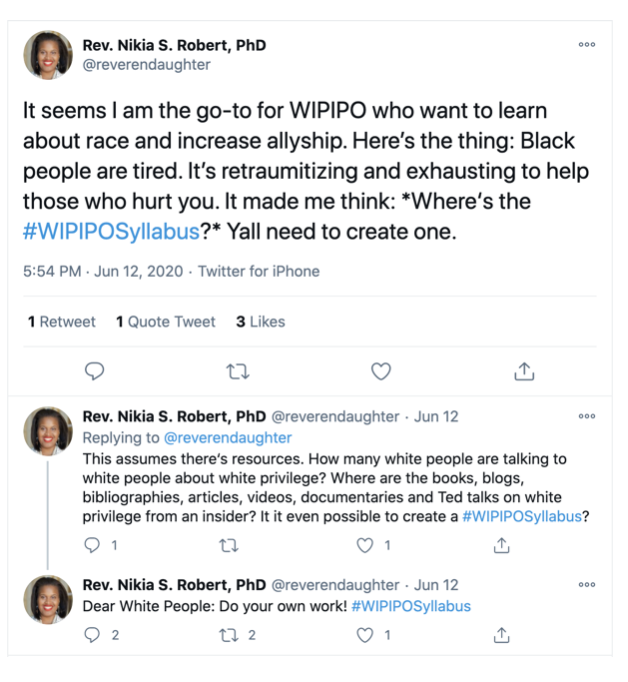 As some of you know, I’m a professor of Christian social ethics. I am surrounded by religious communities, colleagues, and friends who are shaped by the tradition described above. As part of that community, I both teach in a seminary and (try to) speak out as a public theologian. In June of 2020, Rev. Nikia S. Robert, a Black pastor activist for prison abolition and member of the same circles, took to Twitter (in the link scroll up to see full conversation) to express her fatigue with explaining anti-Black racism to white people and her hope for a resource created by and for white people to share with those she encountered. I was among the colleagues called out as someone who should and could respond to this need.

As a practice of allyship and solidarity, the breakdown whiteness website is our response. Some of us named in the Twitter thread spent four months crafting this resource site (rather than an open access google document “syllabus” which are popular in academic circles). We wanted to create something that went beyond the current theological and academic communities from which we come. We also wanted the resource to embody a response to structural racism in its own organization and presentation. That is to say, exploration of the site should itself teach a user how structural racism functions.

Remember what I said about social sin requiring a collective approach and attention to personal change? The site begins with whiteness and structural racism as the primary focus. We describe the changing language around anti-racism movements so we can move beyond reconciliation and multicultural approaches that tend to leave out the perniciousness of white supremacy in favor of viewing everyone as equal despite how race shapes access to power and tangible life outcomes. We want white users of the site to understand that whiteness bestows privilege upon us (wanted or unwanted) and we can combat those privileges on a social scale. For example, in our household we truthfully discuss the U.S. history of racism and its impact on the Connecticut criminal justice system and current political campaigns. That education happens in our household on an individual level. As a Guilford resident, I also need to support GPS in their initiatives to provide historically accurate and anti-racist education to all students.

Second, deepening the precision with which we understand systemic racism, requires on-going education. Breaking down whiteness means understanding how race-based power relations function, in various systems of our society. As we say on the site, “From criminal justice to home ownership to health outcomes, whiteness has disparate impacts. . . . By considering these systems separately, we can see how whiteness functions in particular ways in each system. Plus, choosing a particular system can provide an accessible entryway into understanding systemic racism.” We divide up various aspects of systemic racism into “bricks” related to age and social issues. This visually shows the various “bricks” that build up whiteness and relate to other forms of oppression. As we break down different bricks, we see how something like freedom of sexual and gender expression are different for a straight white single woman, a queer Black mother, a gay Latino youth, and a married Black man. The brick and wall metaphor helps us see the interlocking nature of different oppressions, often referred to as intersectionality.

Third, inaction, especially as a Christian, is a choice to support racism. As scholars and teachers of Christianity the team who built the site is keenly aware of the role of Christian theology and churches in both creating structural racism and maintaining it. One only needs to consider the Christian connection between white supremacist groups like the Klu Klux Klan, white citizens using scripture like slaves obey your masters to justify chattle slavery, or the on-going racial segregation of churches to evidence the link between Christianity and racism. This is why we have included Church and Christianity as a “brick” that needs to be removed to end systemic racism. Some will say, it is a twisted version of Christanity that supports racism or maybe it isn’t “true” Christianity at all. I often have to remind myself that Christianity is a changing and multifaceted tradition. I affirm that many have found within Christianity and churches the resources to push back against structural racism. Christianity is not alone in this struggle, so we also added resources from other religious traditions. We hope to add more as this is an area of weakness, given our team is Christian.

Like all educational sites, this is only a first step. We want users to take action based on what they learn. We were able to create this site with generous donations from white colleagues, friends, and family, some of whom are members or friends of First Church. For that, we are very grateful! We are committed to hiring and compensating people of color who are designers and social media experts. This serves two purposes: any money generated by donations goes directly to support businesses run by people of color and provides a perspective check for us as a team of white women. For example, the team members initially thought we should remain anonymous, no videos or photos. Then our project partner, a black, queer identified web designer reminded us that people of color do not get the option of remaining anonymous in social spaces or social movements, and neither should we. Thus, adding videos and photos is not about taking credit, but rather being accountable.

As a next step, we want to promote the site via social media to create a wider community that can learn and take action together. To that end, if you would like to donate to this project, message us and please consider an equal donation to an anti-Black racism group run by Black, indigenous, or people of color (BIPOC) leaders or donate there and not to this project.

Structural racism is social, systemic sin that we consciously and unconsciously participate in everyday. Sin is a turning away from God or brokenness in our relationship with God. If we are to seek justice and repair our communal relationship with God, we need to collectively work everyday to be anti-racist. We will fail; that’s what it means to be sinful people. We will also succeed; that’s what it means to be a beloved community sharing in God’s grace.