Stolen by the Presbyterians: My First Stole

Jake offers a pride month reflection on the source and reason for his rainbow boa feather stole he will be wearing this Sunday in worship on Pride Sunday!

Stolen by the Presbyterians: My First Stole

I was an intern on loan. It was the summer of 2010, and I had just returned to the states from a year abroad in France. While I was away, the chaplain at Grinnell College, The Rev. Deanna Shorb, a Yale Divinity School alum helped me secure and fund a coveted summer internship with her Yale classmate, The Rev. Dr. Rebecca Voelkel. At that time Rebecca ran the National LGBTQ Task Force’s Institute for Welcoming Resources out of a small office in the Minnesota Church Center in Minneapolis. It was like the think-tank, the resourcing office, the creative and theological energy behind the Open and Affirming LGBTQ movements in most denominations including the UCC. The Rev. Dr. Rebecca Voelkel’s bold theology and witness remains an inspiration and example for my life and ministry.

About halfway through that incredible summer the Presbyterians (PCUSA) came to town (it just happened to also be in Minneapolis) for their General Assembly (GA). It wasn’t just any GA—it was the GA where they would debate and vote on LGBTQ ordination with a resolution called 10-A. With General Assembly arrived the most incredible team of leaders, musicians, and activists I had ever met—and as Presbyterians—they brought excellent Scotch with them as well!

Rebecca wisely decided, for the entirety of their time in Minneapolis during that most important meeting, to lend me wholesale to Michael Adee and More Light Presbyterians. I was officially an intern on loan. Not since my early childhood at Manasquan Presbyterian where I was baby baptized in New Jersey had I been so close to becoming Presbyterian again.

Many important things happened that week, and I have many sermons to share from being there for that vote that changes history for a denomination nearly twice the size of the UCC. One moment I will never forget. I was in a long hallway at the entrance to the ballroom where a progressive PCUSA event called the Witherspoon Dance was taking place. It is a fundraising event run by the Presbyterian Voices for Justice.

I was wearing a Grinnell College shirt. Suddenly, wearing a big rainbow, feather boa…someone was running down the hallway full speed at me while shrieking with joy. She gave me a big hug and proclaimed, as if finding a long-lost friend: A GRINNELLIAN! 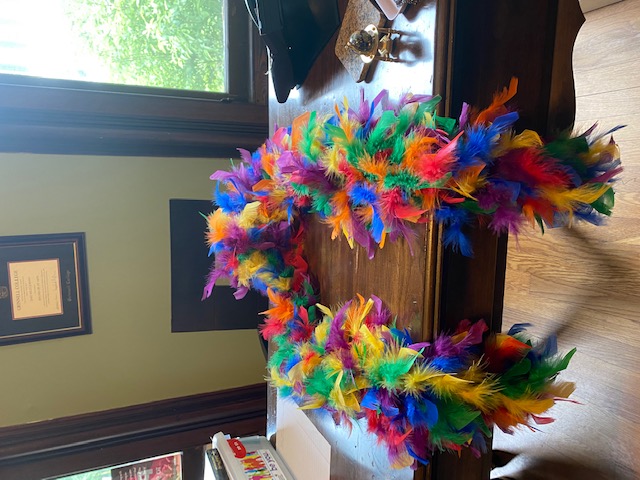 It was a favorite retired Professor of Grinnell College, Sylvia Thorson-Smith—a living legend! Sylvia was known as having a central role in supporting LGBTQ students at Grinnell along with her husband the PCUSA minister in Grinnell, Iowa for decades. She also helped to establish and secure the Gender and Women’s Studies Program at Grinnell College. I spent the rest of GA following Sylvia from event to event where there was singing, protest, and prayer. I remember following the rainbow boa. That week, I finally decided to put the dreams of French scholarship aside and apply to seminary in the fall.

Here we are left to right at GA: me, Sylvia, and our friend Patrick Evans (formerly of Marquand Chapel at Yale): 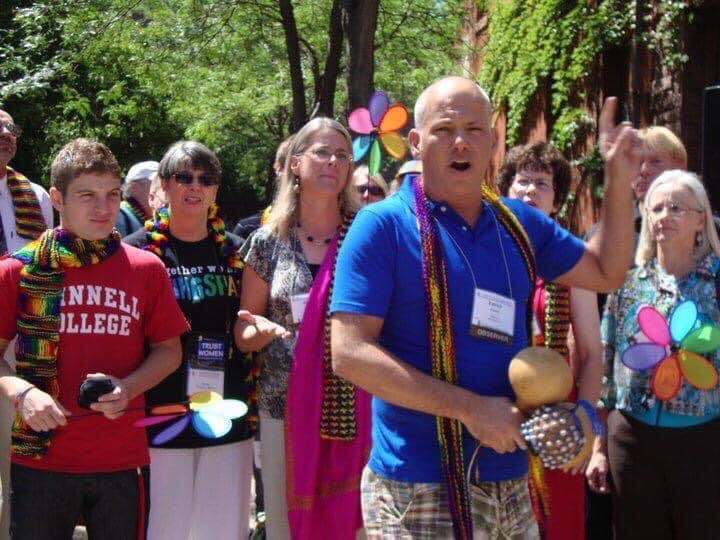 That next year, Emory’s Candler School of Theology (a United Methodist Seminary) recruited me as a voice for out, LGBTQ seminarians. They bit off more than they expected. They just wanted me to be there, but they would have preferred that I not speak. Three years later, at graduation, after fighting for my UMC and other LGBTQ friends at Candler for three years, I emailed Sylvia. “Do you think I could borrow that rainbow boa from GA?” Too many LGBTQ siblings would not continue onto ministry because of being outed by their Conferences or exhausted by the process and hiding. I was exhausted just by having survived seminary—mostly thanks to friends from the School of Public Health and (ironically) the Emory French Department. My last stand was graduation—a moment I knew the Bishop and District Superintendents would show-up to be seen.

They let every student who donated to Candler make a statement in the graduation bulletin. Most put names. I did something else…I doubt they continued this tradition after. 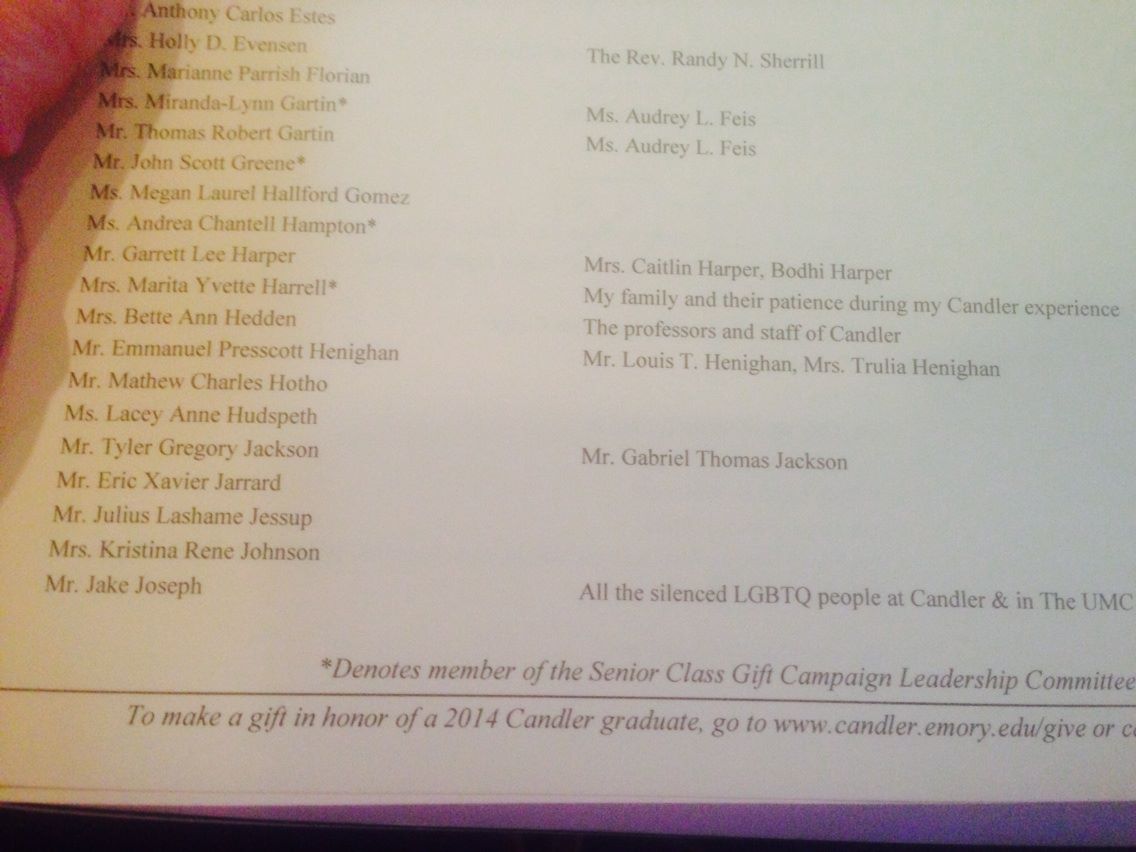 Finally, with my new Emory masters hood, I also wore my very first stole sent to me by a legendary Grinnell professor from the week when I was a summer intern on loan to the Presbyterians. There was no way that the UMC power structure could pretend that their heteronormative campaign at the Candler School of Theology was successful with me in the room. :-) 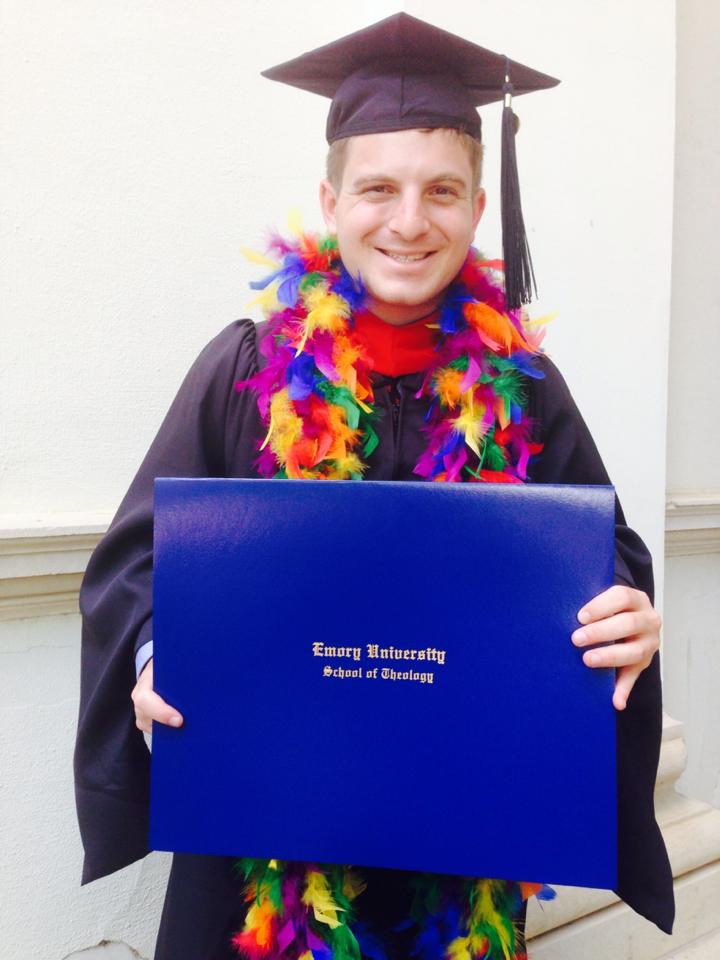 My first stole was not expensive, fancy, or formal. It wasn’t from my ordination or installation. My first stole was a big, bold, fabulous…rainbow boa. Sylvia sent it to me that week for that purpose. People ask me why I am not like other more normal clergy—it is because I never had that in mind. Sometimes you just have to stand out.

This Sunday, I will be wearing my first stole in worship as we recognize a Pride/ Open and Affirming Sunday. It doesn’t look like other stoles just like I do not hope to be like other ministers, but it means so much more than any other stole ever could in my life and calling. And all of it from the week when I was an intern on loan...following the rainbow boa.

Let’s see what God will do next.

With Hope and Pride,
Jake

The Rev. Jake Miles Joseph has been at First Church since September 2019. Jake received his BA in French from Grinnell College in Iowa and his Masters of Divinity and Graduate Certificate in Human Rights from Emory University in Atlanta. He most recently served a congregation in Northern Colorado for five years as their associate minister where he chaired the housing authority Board of Commissioners, was on the board of Habitat for Humanity, and was a member of the Colorado Governor's Clergy Council. He and his scientist husband, Gerhard, live in Milford, Connecticut.