As devout members of the Puritan Reform Party, our founders at First Church embraced high Christian ideals. By 1643, the time had come to “gather together in a church way.” For mutual protection from common enemies, they joined with New Haven Colony and changed their name from Menunkatuck Plantation to Guilford. The town and the church were synonymous. The first Meeting House, erected on the Green, was a primitive stone structure with a thatched roof.

By 1713, the congregation had outgrown it, and a larger building, also on the Green, was constructed. This is said to be the first church in Connecticut to have a steeple clock and bell. After a century, there was a move to clear the Town Green of its buildings. A site overlooking the Green was purchased and our present church was dedicated in 1830. It remains basically the same today.

In the mid 17th Century, political events in England brought about a counter emigration of Guilford’s most prominent leaders including Whitfield. William Leete remained as an outstanding leader persuading Guilford and New Haven Colonies to accept the charter of the Connecticut Colony. This charter replaced the custom of restricting the vote to church members being the first step in the parting of church and state.

As settlements in the outlying areas created long and difficult distances for getting to Sunday Sabbath, permission for new societies were requested. These were granted to East Guilford (now Madison), Cohabit (North Guilford), and North Bristol (North Madison).

In the early 19th century, the slavery question was a hotly debated issue in the church. The Anti-Slavery Society was denied the use of the building for speakers on the basis that it was perceived a political rather than  religious issue. Abolitionist members were granted their request to form a new society and built a church on Park Street in 1840. For many years this flourished, but by 1920, with its mission over, most of the members transferred back to First Church.

A diversity of changes in worship and service evolved during the 1800s. Supplementing religious education in the home, the first Sunday School was organized in 1816. As part of a widespread movement, First Church “raised up” 8 missionaries who worked in different parts of the world. Many barrels of clothing were sent to needy areas within the country. Over the years, music became a more important part of worship changing from tuning fork, flue, and melodeon to organ. A beautiful Austin organ is in use today.

The great New England hurricane of 1938 toppled the 108 year old Congregational steeple. It was rebuilt the following year with many contributions from the community at large.

In 1948, First Church favored the union between the Congregational Christian Churches and the Evangelical and Reformed Church to form the United Church of Christ. With the opening of the I-95 highway, the population of Guilford rapidly increased, bringing in people of diverse backgrounds, which has resulted in ecumenical communication and social action. First Church now has 800 active members. A look at our history helps us see our place in a long line of faithful people who made possible our continuation to this day. 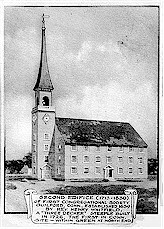 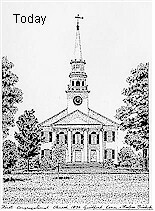 Resources
The Covenant of 1639
The Rev. John Higginson

From 1639 to Today
In 1639, almost 20 years after the settling of the Plymouth Plantation, the Reverend Henry Whitfield, with his company of approximately 40 followers. sailed from England to Quinnipiack Harbor, now New Haven. On shipboard, they drew up a covenant in which they pledged mutual loyalty and help in the new plantation. While New Haven’s founders with John Davenport came primarily from London with mercantile interests, Whitfield and his followers were from the surrounding rural counties. This probably influenced their choice of site, the present Guilford.

About native peoples of Connecticut:
Meshantucket Pequot Museum & Research Center.
The Pequot War (a documentary)
“Still Pequot after all these years.”