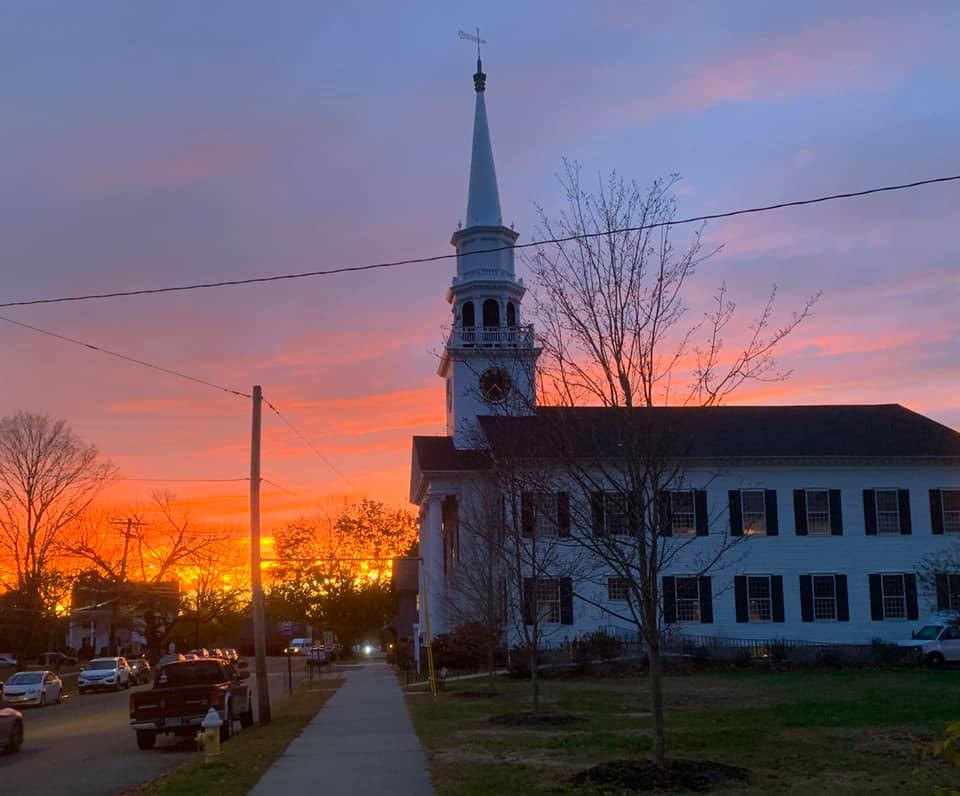 These ancient words found in Matthew and Luke should strike fear for anyone who idealizes the status quo!

"And he was transfigured (transformed, changed, Greek Word—Metamorphosized) before them, and his face shone like the sun, and his clothes became dazzling white. 3 … they fell to the ground and were overcome by fear. 7 But Jesus came and touched them, saying, “Get up! and do not be afraid.”

God is transforming again in our world. How we connect to each other and to reality is changing, yet Jesus still reaches out. The nature of the familiar, the known, the sure, the steady (the rule book of church and politics and family)…is all in a process of becoming strangely new to us, and we are overcome by fear. Perhaps not in Guilford, but the UCC beyond this vibrant local church is paralyzed with fear. What will happen to us? What shall become of traditional churches? How will we pass budgets in 20 years? Why are no young people staying in ministry very long? And yes, and yet… Jesus, Jesus touches us disciples and says, “Get up and do not be afraid… metamorphosis is part of faith. You just have to look at things with new eyes.”

The transfiguration teaches us to see things new again. We aren’t alone in this. In the United Church of Christ, we have many great ancestors of faith and theology tradition who have marveled at this story of the Transfiguration: Paul Tillich, the Niebuhr Brothers, Jonathan Edwards, Increase Mather, and even living authors like Walter Bruggeman and Marilynne Robinson. One of the greatest, however, was a Nutmegger or Connectican (as I have also heard). His name was The Rev. Dr. Horace Bushnell who lived from 1802-1876 in Litchfield and Hartford. He was a minister and a theologian who is often called the founder of Progressive Christianity and modern theology. His theology was largely focused on Transfiguration. This passage from Matthew is a passage that spurred the creation of Progressive Religion—the idea that God is not calling us to be static. Religion isn’t a set of rules… rather it is an artform.

When Bushnell died, his daughter didn’t build a church or a shrine to honor her father. She didn’t endow a seminary. Rather, she commissioned the architects of Grand Central Station to build the Bushnell Center for the Performing Arts in Hartford. She honored her minister father with a home for art. It even has the largest hand painted ceiling mural in the United States. It is wild to live in a place where civic buildings are named after UCC ministers—and of all the UCC ministers—Horace Bushnell “The Father of American Religious Liberalism!”

I was speaking the other day with a clergy colleague. She asked, “What is Connecticut like?” My response was, “You know… I think the Spiritual Language… the Vernacular for God in Connecticut is the arts… especially visual arts in a way I have never witnessed anywhere else including my year in France.” The arts and faith are inextricable from each other here in the same way that faith and the Great Outdoors/ sports are indistinguishable things in Colorado. Bushnell’s memorial underscores this theory.

In his 1849 book, God in Christ, Bushnell changed theology by being one of the first to challenge the notion of Sacrificial Atonement. The purpose of Religion is deeper than any doctrine or prescription. The Transfiguration is meant to symbolize the coming of something new.

Bushnell wrote, “My own experience is that the Bible is dull when I am dull. When I am really alive, and set in upon the text with a tidal pressure of living affinities, it opens, it multiplies discoveries, and reveals depths even faster than I can note them. The worldly spirit shuts the Bible; the Spirit of God makes it a fire, flaming out all meanings and glorious truths.”

“The more difficulties one has to encounter, within and without, the more significant and the higher in inspiration…life will be.”

“Christianity is no mere scheme of doctrine or of ethical practice, but is instead a kind of miracle, a power out of nature and above, descending into it; historically supernatural movement on the world [transfiguration], that is visibly entered into it…”

I don’t believe for a minute that the fact that Horace Bushnell’s family chose to honor him with a dramatic home for the arts was a theologically haphazard choice. I studied Bushnell in seminary, and it is his approach to Scripture, especially difficult and artistic passages like the Transfiguration, that left their mark on Congregationalism and all of Christianity. Christianity is art, but it isn’t a factual photograph or a dull still life—rather it is passionate Impressionism of the Soul.

We encounter the Scripture as a form of artistic impression of the divine! Through Bushnell, Christianity went from being read as a manifestation of doctrinal facts to a spiritual expression that offered to go deeper to the impressionist brushstrokes of God. This is the heart of the Transfiguration. We read this text not looking for facts, but we seek feeling of connection to a God who reaches out for us especially during the scary times of religious metamorphosis.

Oddly, I know so many Progressive Christians who find the Transfiguration to be stressful and terrible. They say it is stressful because it doesn’t have enough facts, it isn’t historically verifiable (they take the Jesus Seminar too far to the point of being its own dogma), and it is irrational. We, especially in the UCC, need to reclaim the magical and the mysterious miracle perspective of Horace Bushnell and learn to be artists encountering the possibility of Scripture again. It is essential for the survival of our faith. Our Congregational tradition and institutions (pretty old white churches on town greens) can survive without faith by grit and endowments alone if necessary or as community spaces. I hear some former UCC churches are doing really well over in the River Valley as antique shops. BUT faith can only survive if art is at the center of all we do. “Get up and do not be afraid.”

The art of encountering Scripture is best compared to Impressionism. Impressionism was once considered a radical and dangerous form of art—free from the rules of exact representation. We live in a world where we have reached, like the impressionists, the end of facts. We have discovered how powerless words and arguments can become in a vacuum. As Progressive Christians, we are caught in the trap of thinking that our faith has to be uniform, regulated, exact, and consistent. We have simply replaced one form of Puritanism with another.

Sir Professor E. H Gomnbrich, the greatest art historian of the 20th Century, once wrote about the arrival of Impressionism in the late 19th Century, “[One critic found the new artists to be particularly ridiculous… he referred to the whole group of artists as the impressionists…he wanted to convey that these painters did not proceed by sound knowledge, and thought that the impression of a moment was not sufficient to be called a picture. The label stuck. It’s mocking undertone was soon forgotten…All the old bogeys of dignified subject-matter, of balanced composition, of correct drawing were laid to rest.  The struggle of the impressionists became the treasured legend of all innovators in art [and those who] recognize novel methods.”[1]

It is no accident of history that the theology and the spiritual impressionism (a new and novel approach to Scripture) of Horace Bushnell is concurrent with the emergence of impressionism as a form of art. Movements of art and philosophy/ theology go together! It is further, then, not an accident, that Impressionism came to the in the United States in a dilapidated mansion modeled after the neighboring Congregational Church also in Connecticut. We have always been a place where movements have started—not where they go to die.

“Tonalist [impressionist] landscape painter Henry Ward Ranger thought that scenic New England would be the perfect setting for a colony [like those he had seen in France]. When he stumbled upon Old Lyme and [widow] Florence Griswold’s [grand] boarding house in 1899, he knew that he had found the right place. The small town was a peaceful, old-fashioned spot to get away from modern city life. It had a beautiful landscape along the Lieutenant River. To top it all off, creative and well-educated Florence was a sympathetic host to artists. Ranger returned with his friends, who rented rooms for the summer, and the Old Lyme Art Colony was born.”[2]

Miss Florence, as she was called by all, became known as the “Patron Saint of American Impressionism” and her old house, modeled after Old Lyme Congregational Church became known by American Artists as “The Holy House.” The artists painted all over her house and the house itself—out of a Congregational home in Connecticut, they forever changed art, hope, and the very idea of transfiguration of place and people. Florence once said of this transformation, “So you see, at first the artists adopted Lyme, then Lyme adopted the artists, and now, today, Lyme and art are synonymous.”

We are again in a time when life in this country fraught with great change and uncertainty.

There has never been a time in the recent history of the American Church when Transfiguration (when seeing things in a new way) has been as urgent as it is today. We are in an all-out theological and ethical emergency. We need metamorphosis and creative new vision quickly. Luck for us, we are the legacy of the concurrent Connecticut movements of the spiritual art of Horace Bushnell and the start to modern art in North America of the Old Lyme Art Colony!

2 And he was transfigured (transformed, changed, Greek Word—Metamorphosized) before them, and his face shone like the sun, and his clothes became dazzling white… they fell to the ground and were overcome by fear. 7 But Jesus came and touched them, saying, “Get up and do not be afraid.” What is your impression, what does your heart paint, how does Jesus reach out to you in this passage? How much new truth can come through learning to live with and even love the constant, artistic process of Transfiguration with Christ?

UCC member and author Marilynne Robinson writes in her book, Gilead, “[God] is more constant and far more extravagant than it seems to imply wherever you turn your eyes the world can shine like transfiguration. You don’t have to bring a thing to it except a willingness to see. Only, who could have the courage to see it. Theologians talk about a prevenient grace that precedes grace itself and allows us to accept it. I think there must also be a prevenient courage that allows us to be brave - that is, to acknowledge that there is more beauty than our eyes can bear, that precious things have been put into our hands and to do nothing to honor them is to do great harm.”  The Transfiguration, church, is about learning that God is always doing something new, and like the Impressionists in Old Lyme and Rev. Bushnell in Hartford in the late 19th Century, it is again time to be brave—to have courage—because there is yet so much light and truth to break forth from God’s word.
But Jesus came and touched them, saying, “Get up and do not be afraid.” Then Jesus handed them a paintbrush.